Joao Laia writes about text on painting (or painting on text), following the work of Irma Blank. The relationship between book and canvas, between the structure of a single page and the gesture of the artist, between language and abstraction.

Since the late 1960s Irma Blank has been exploring the continuities and ruptures between written and visual languages, focusing on the elemental potentialities of the sign, reimagined as a site of infinite discovery. Blank’s method is established around series of work where the artist explores a specific mode of analytical production. Using text as a main reference point, the artist recurrently employs and quotes the book as a means to organize and contextualize her gestures. In her two first major cycles, Eigenschriften and Trascrizioni, the book is alluded to either directly or via its primary element: the page, both series displaying homogeneous textual landscapes. More recent bodies of work such as Radical Writing and especially Avant-testo depart from this line, enhancing the abstract potential of her method and abandoning all direct representations of the sign.

Eigenschriften explores the possibility of written language to escape the necessity of transmitting meaning. The artist filled each paper page with small signs from which is impossible to extract any sense of signification. After close inspection, the seemingly homogeneous image reveals itself to be made of an extraordinary variety of shapes, intensities and colours that mark different periods of time inside the it. In this sense each work becomes a diary, a visual representation of time. Also, the signs’ similarities with letters and each grouping’ resemblance with words or phrases hints at Blank’s investigation of a stage prior to written language where signs where simply visual elements.

As indicated by its title meaning literally transcriptions, Trascrizioni presents a series of works where the artist obsessively transcribed texts and redesigned the original letters, words and phrases beyond recognition and linguistic understanding, creating a mass of elements of which the overall outlook is reminiscent of a broadsheet newspaper central page. Trascrizioni plays with the feeling experienced while reading a text in a language one does not know. The written elements become pure visual markers, devoid of any signification: only the rhythm of the paragraphs and columns as well and the black and white contrast are left. 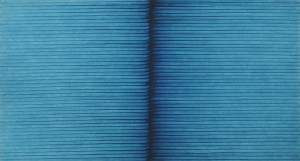 Radical Writing introduced the idea of the body as a machine in Blank’s practice. Whereas in Eigenschriften and Trascrizioni each work exhibited carefully crafted re-articulations of letters, words and phrases, where the manual labour was clearly present, namely in Eigenschriften’s resemblance with handwritten calligraphy, Radical Writing replaces this idea of manual labour for a conception of the body as a machine, which repeatedly performs a single action. In this case, the previous representations and rearticulations of the sign are replaced by a purely abstract element, the line, understood a further reference to the phrase. This machine-like sensibility is underlined by the fact that each line corresponds to a single breath of the artist, linking body and representation through action without nevertheless gesturing a subjective positioning. This rejection of the ego results in the abandonment of the intimate and diaristic style of Eigenschriften and the artisan subjective features of Trascrizioni. Yet the book as a structural model is still present notably in the end and start sections of each line whose combination mirrors the shadow of the page close to the book’s biding.

Together with Radical Writing, Avant-testo is the culmination of Blank’s evolution towards abstraction and the progressive erasure of the self. The series is built around an intricate manipulation of rhythm and colour with the artist holding at the same time several ballpoint pens while marking circular shapes on the canvas. Here the machine-like features of Radical Writing are juxtaposed with an almost trance like state and both extremes united by the same gesture. Avant-testo continues the shift away from the expression of the self while retaining an emotional atmosphere, proposing an austere positioning of extreme concentration and total abandonment.

Throughout the different series Irma Blank is drafting a new type of language while returning to early modes of communication when written material was worked with as a visual element, as an image. She explores a fundamental mode of expression which is not dominated by representation but rather a purely abstract material, a cleansed language released of its‘ significant imperatives. In this movement of liberation the body is understood as a tool akin to a machine, an apparatus used to produce repetitive traces that nevertheless are able to keep a great degree of intimacy. Irma Blank’s pieces are moments of reclusion, meditation and introspection, silent and intimate gestures of depersonalization and expression.